The life and films of Joe Noble 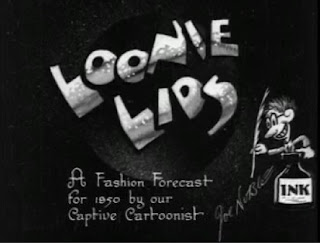 Charles "Joe" Noble's name will turn up in just about any history of early British animation, but few such accounts will go into much detail about his work. He made some noteworthy accomplishments: he directed what appears to have been Britain's first sound cartoon, and introduced several early series characters (including Sammy and Sausage, two of the country's more successful animated heroes from the period). But despite this not a great deal has been written about him.

My three main sources on his life and work are Denis Gifford's filmography, which gives details on a number of his key films but overlooks a large portion of his other material; the British Pathé website, which provides a large amount of his shorts for viewing and purchase (where possible, I've linked to the relevant pages here); and an obituary written by Ken Clark in 1984.

According to Clark's account, Noble was born in 1894 and, inspired by Dudley Buxton, decided to take up animation. In 1922, after making something apparently called Out of the Ink-Pot, he worked on Thomas Webster's short Tishy (which I wrote about here) and in 1926 collaborated with Webster and Dick Friel on three short films starring a racehorse named Alfred and his trainer named Steve. The same year he created an animated version of Dismal Desmond, a dalmatian character apparently originally designed as a toy by Richard Ellott; there would appear to have been a series of Desmond shorts, although I have not been able to find out exactly how many films the character starred in. 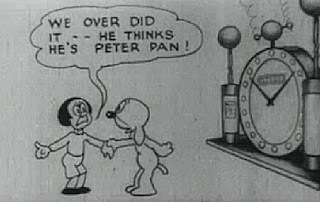 
In 1928 Noble began directing a series of cartoons starring a boy named Sammy and his dog, Sausage. They appeared in a total of seventeen films: Putting the Wind up Winnie, Television, The Pipe of Peace, The Shadows, Inside Information, Fowl Play, Crossing the Line, The Good Old Days, Onion is Strength!, The Lie Do Cup, A Big Draw, A Bite for the Biteless and Shooting Stars in 1928; Fire!, No Parking Here and Whatrotolis in 1929; and finally Call Me Speedy in 1930. 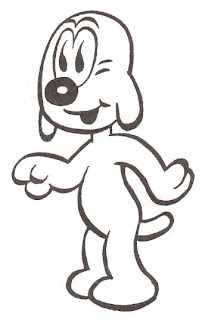 I have not seen either 'Orace film, and the only trace of them I have yet to come across is the above image from Denis Gifford's book The Great Cartoon Stars: A Who's Who! As can be seen, 'Orace was basically Sausage under a different name. 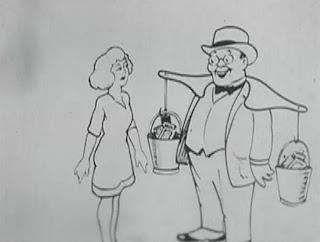 In 1929 Noble directed Meet Mr. York! A "Speaking" Likeness, reportedly the first animated advert with synchronised sound, which is available online at the Yorkshire Film Archive. The film is interesting as a museum piece: although better-known cartoons from the early sound period emphasised music, Mr. York contains no score at all and is instead largely dialogue-driven; in this way it prefigures much television animation. The lipsync is executed using rather basic cutout animation, similar to Captain Pugwash.

The short is also rooted in the idea of animation as a novelty; like some of Winsor McCay's work from the previous decade it contains lengthy live action sequences in which the animator draws the character before bringing him to life. A stop-motion sequence in which a bar of chocolate reassembles itself rounds the film off.

At some point Noble also made Illusions, an odd film combining cartoon humour, documentary and fashion advice; the pleasingly weird The Froth Blower's Nightmare; and Little Bruin the Talking Teddie, apparently another attempt at creating a series star. 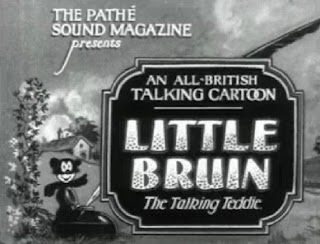 
Noble's post-twenties work includes Do You Know? (1931), a how-to-draw short featuring stop motion and drawn animation; Hats Through the Ages (1931), a mockumentary cartoon; Supposing - ! (1932), consisting largely of still drawings and text; Wed-Time Stories (1932), starring the "Microbephone" character from Illusions; Beauty - A Skin Deep Commodity (1932), a documentary on differing standards of beauty featuring a largely irrelevant skit with Wally the Wily Welsh Rabbit; Loonie Lids (1933), a satirical look at clothing; Facetious Fashions (1933), another film on much the same subject; On the Farm (1933), a collaboration with Sid Griffiths, Brian White and H.M. Bateman; and Run Adolf Run (1940), an anti-Nazi film. 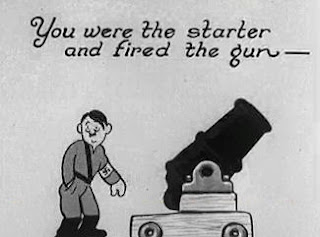 This is an impressively-sized filmography, but from watching the films it becomes apparent that Noble never really evolved since his days animating Sausage and Mr. York in the late twenties. Something like Run Adolf Run may have looked reasonable alongside Felix the Cat, but in 1940 - the year of Friz Freleng's You Ought to be in Pictures and Hanna & Barbera's Puss Gets the Boot, to say nothing of Fantasia and Pinocchio - it must have seemed rather old-fashioned.

Small wonder that Noble's output seems to have tailed off in the late forties; I know of only four more projects that he worked on.

In 1948 he provided animation for an educational short called This Film is Dangerous (see the BFI archive for more information) while in 1950 came the feature film Mr H.C. Andersen, a biopic of the fairy tale author. This was mostly live action but had a few animated sequences provided by Noble. A Film Report reviewer was not impressed by these, complaining that "Instead of telling the story straight, many lengthy and irrelevant cartoon sequences are introduced. They contain a few amusing moments but on the whole are very crude." In 1955 he contributed special effects to something called Cross-roads; again, all I know about this is from the BFI database.

According to Ken Clark's obituary, Noble's last film was called Trachoma, made in 1970 for the Overseas Film and Television Centre. Named after an eye infection, this was presumably another diagrammatic educational film.

"A plan to honour Joe at the 1979 Cambridge Animation Festival was abandoned only when it was discovered that he was living alone in London, partially-sighted due to glaucoma, and confined to a wheelchair in a very poor state of health", wrote Ken Clark. "It was feared the travelling and the effort and excitement of a public appearance would prove too much." Joe Noble, whose career in animation spanned some fifty years, passed away in 1984.
Posted by Neil at 07:48