Continuing my series of posts taking a year-by-year look at the history of British video games, focusing on the many colourful characters that the industry cooked up. See part one here, part two here. 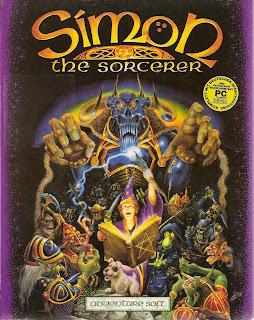 The puzzle-based adventure game - in which you guide a character around an imaginary world, collecting objects and figuring our where to use them - was always a bit niche. Dating back to the earliest days of video gaming, titles such as Colossal Cave Adventure and Zork attracted loyal followings amongst enthusiasts but, with the possible exception of Beam Software's 1982 game The Hobbit, never achieved the mainstream success of their more action-oriented cousins. It seems that people were generally more interested in the quick-fix fun of blasting space invaders or munching ghosts, rather than the more sedate charms of typing "go east" and "pick up food" until having to start all over again because you unknowingly walked into a room with an orc. 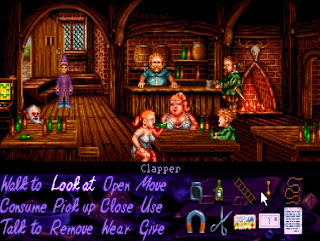 The earliest games in this genre were purely text-based. When titles such as King's Quest added a graphic element, so you could actually see your adventurer and his surroundings, the previously obscure genre was blown wide open. But there was a second element which, while not vital, could improve the prospects of an adventure game immeasurably: a sense of humour.

Simon Woodroffe's Simon the Sorcerer was by no means the first adventure game to depart from po-faced Tolkienades for something altogether sillier, but it does stand as a quintessential example of this approach. Simon is an adolescent boy who is suddenly transported into a world of fantasy. The underlying story is a loose Lord of the Rings parody - Simon's archenemy is the Dark Lord Sordid - which also manages to lampoon everything from the Billy Goats Gruff to The Sword in the Stone along the way. All of the game's dialogue is spoken, with Red Dwarf's Chris Barrie in the title role, giving the whole thing the feel of an interactive radio comedy. 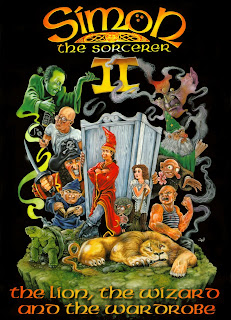 Simon is no Narnian innocent. A common observation is that, to speak very broadly, American comedy prefers clean-cut, likable characters, while British comedy has a taste for deeply flawed protagonists - think of Captain Manwaring, Blackadder or Basil Fawlty. Simon does not buck this trend, treating his new surroundings with lashings of sarcasm and chauvinism. Select the "pick up" option and then click on a charater, and Simon will remark "I prefer blondes". 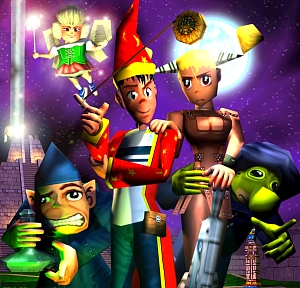 The original game was followed by a sequel and a couple of spin-offs in the nineties, and in 2002 the series hit the third dimension with Simon the Sorcerer 3D. The pop culture references were also updated: "Sounds suspiciously like one of those Japanese RPG things", says Simon at one point. The fourth and fifth games were developed by the German company Silver Style Entertainment. 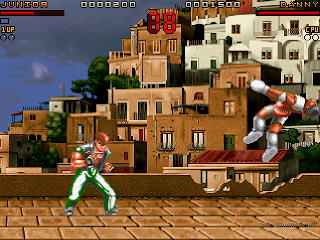 In 1994, the biggest British game release was Rare's Donkey Kong Country. But the main character originated in a Japanese game from 1981, making him ineligible for this list. I considered giving this slot to Diddy Kong, a sidekick created by Rare, but in the end I decided to highlight something of an obscurity... 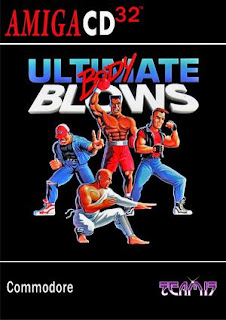 Team17's 1994 game Ultimate Body Blows is a mash-up of two titles released the previous year, Body Blows and Body Blows Galactic. It was clearly inspired by Capcom's popular Street Fighter games, right down to that series' manga stylings: Body Blows is therefore one of the first British video games to be influenced, albeit indirectly, by Japanese anime. 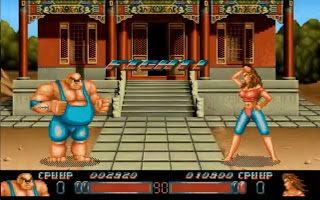 The results are not entirely successful, with strange pop-eyed characters making cheesy macho gestures, but there's something strangely sweet about it all. The game's mid-nineties aesthetic is so naff as to be kind of endearing. 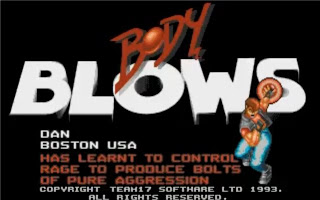 Title screen to the original Body Blows, when Danny was just plain Dan.


As with most fighting games there is a roster of characters to choose from, although Danny and Junior (named after graphic artist Daniel J. Burke and programmer Junior McMillan) appear to have been presented as the main characters - they are the only fighters to appear in both Body Blows and Body Blows Galactic. The original game featured a supporting cast comprised largely of wrestlers, martial artists and other relatively down-to-earth brawlers, but Galactic replaced them with a range of weird and wonderful aliens. 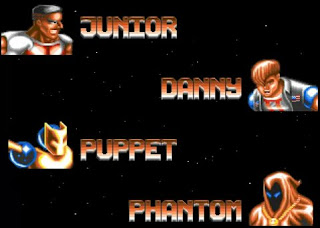 So Japan had Street Fighter, America had Mortal Kombat, and until Rare created Killer Instinct, Britain had Body Blows. The series didn't make it beyond 1994, but still has fans today, as a search on YouTube will reveal. 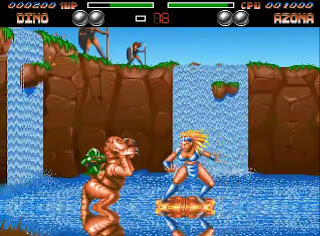 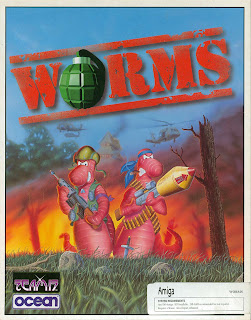 In the last post in this series I noted that the Lemmings series had trouble building on the original game's idea. There was one successful Lemmings follow-up, however, albeit an unofficial one: Worms. 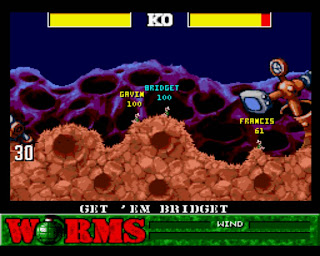 Another game from Body Blows creators Team17, Worms bears a strong outward resemblance to Lemmings. Its playing field is similarly dotted with tiny characters capable of digging though obstacles, and the player is again required to assign various roles to the critters. But while the point of Lemmings was to take the characters to safety by giving them constructive roles such as builder or climber, the object of Worms is to wipe out the opposing player's army using a range of weapons, from shotguns to exploding sheep. This was the era of Itchy and Scratchy, Ren and Stimpy and TV ads by Bill Plympton, and cartoon violence was in. 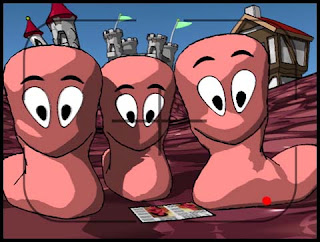 As with the original Lemmings the characters' in-game sprites were so tiny as to be unrecognisable as anything in particular. The cover of the game, and CGI animated sequences included in some versions, depicted the Worms as bulbous-nosed parodies of characters from Vietnam war films; something about this design failed to catch on, and so the Worms were redesigned for 1997's Worms 2. 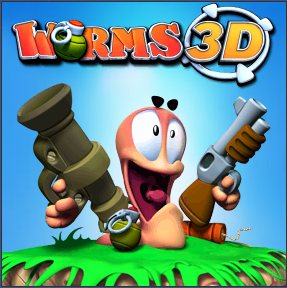 The chubby, big-eyed interpretations had an even wackier armoury (including the Holy Hand Grenade and a giant concrete donkey) and tapped into a zeitgeist just around the corner. The turn of the century would soon be upon us, and with it came a boom in anime-influenced imagery: cute was cool, and Worms realised this at the right time to ride the wave. With full-blown sequels (Worms 3D, Worms 4: Mayhem), souped-up re-releases (Worms Armageddon, Worms World Party) and spin-offs (Worms Golf, Worms Blast) the series has cemented itself as a gaming institution. 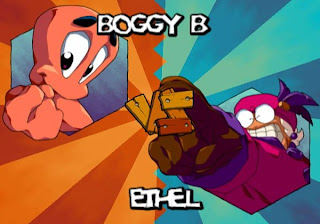 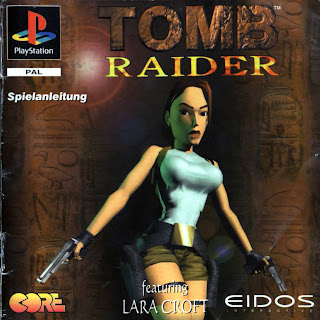 When the Sony PlayStation arrived on the scene in the mid-nineties, it was still generally assumed that each games machine needed a mascot: the Super Nintendo had Mario, the Mega Drive had Sonic, the Amiga had Zool, and so the PlayStation would need a cartoon star of its own. In 1996 developers Naughty Dog dutifully provided Crash Bandicoot, a character who fitted firmly into the tried-and-tested animal-with-attitude mould. But in the end, it was another character debuting the same year who became the console's best-known star. 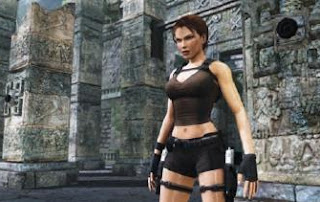 Developed by Derby-based Core Design, Tomb Raider introduced us to Lara Croft, a character who departed from gaming mascot trends. No cartoon animal, Lara Croft instead took her cue from comic book femmes fatales such as Modesty Blaise and Catwoman, and as a combination of Pamela Anderson and Indiana Jones she was tailor-made for a slightly older audience of adolescent gamers. There had been plenty of games starring gun-toting action heroes before, of course, but Lara had a novel twist: her gender. 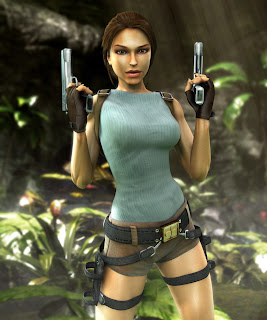 Earlier female gaming protagonists, such as Samus Aran from Nintendo's Metroid games, failed to attract mainstream attention, but Lara Croft arrived at the right time in pop culture history. Xena: Warrior Princess had premiered the previous year, Buffy the Vampire Slayer would debut the next, and the Powerpuff Girls were waiting in the wings: action heroines were very much in. With her design's obvious appeal to adolescent boys debate followed from the get-go as to whether Lara is a feminist milestone or just another male fantasy, but she is almost certainly the single best-known female video game character. 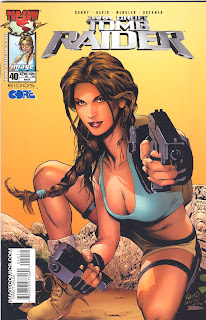 She is also undeniably the best-known character from British video games. Zool was adapted into some novels and Wizards and Warriors made some tentative steps into TV animation, but it was Tomb Raider that became a mass-media sensation, with Lara gracing feature films, comics and a ten-part animated series for the web. 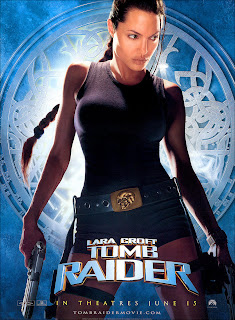 Since 2006 the Tomb Raider games have been developed by US-based Crystal Dynamics. But Lara was born in the UK, and love her or hate her, she rivals Wallace and Gromit as Britain's most widely-recognised animated character. 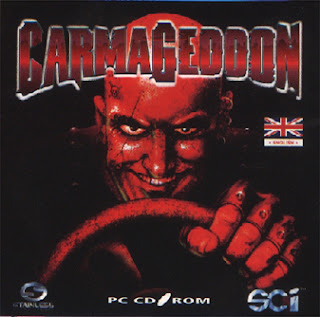 It seems safe to say that the key British game of 1997 was Grand Theft Auto, developed by Lemmings creators DMA Design. With four sequels and numerous spinoffs GTA kicked off one of the most bankable franchises in video gaming, and one of the most controversial. In the game you play as a criminal, with level objectives that include robbing banks, taking out rival gangs and blowing up police precincts, with much reckless driving along the way. 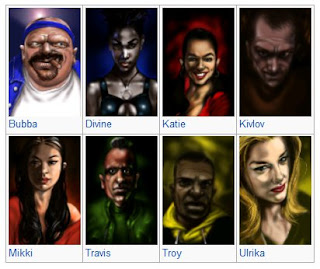 The cast of Grand Theft Auto.


Significant as it may be, Grand Theft Auto can hardly be called a character-based game: the player is given the choice between eight protagonists, all pretty much interchangeable. It wasn't until Grand Theft Auto II that the series introduced a main character, Claude Speed - and even he was subsequently dropped from the games. In 1997, the face of questionable driving games was Carmageddon's Max Damage. 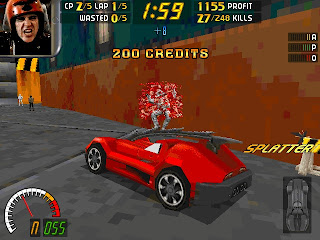 Carmageddon was created by the Isle of Wight-based Stainless Games and has been hailed as the "most controversial game of all time" by the Daily Mail. The objective is to drive a car around, running down pedestrians while competing with other drivers who are doing the same - a premise lifted from the 1975 film Death Race 2000. Max Damage, the principal playable character, served as a mascot for all this mayhem, the game's cover art showing the iconic image of his grinning red visage leering from behind a steering wheel. 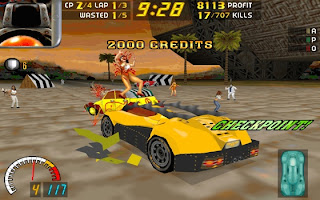 There had been controversial games before 1997, the most famous being Mortal Kombat and Doom. But those titles had obvious fantasy settings; the themes of Carmageddon were clearly seen as being a bit too close-to-the-bone. The BBFC initially refused a certificate, resulting in a censored version that replaced the pedestrians with zombies, although the original version was eventually let onto the market. 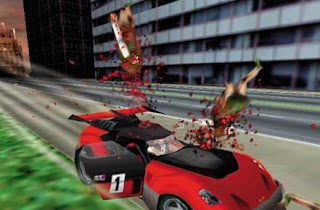 A year before Carmageddon was released David Cronenberg stirred up debate with his film Crash, about people who are sexually aroused by car crashes. But while controversial films tend to spark arguments about artistic expression, the same can rarely, if ever, be said of controversial video games. Carmageddon was never about artistic expression: it was designed as a tasteless game because tastelessness would (and, indeed, did) sell. In a jaded era, it seems that video games were the last medium where shock for shock's sake was commercially viable. 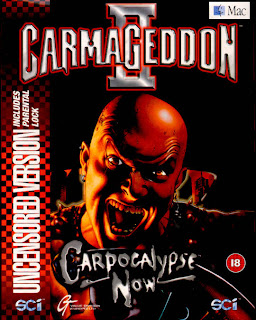 The following year Carmageddon was given a sequel with the daft name of Carmageddon II: Carpocalypse Now, and after that came Carmageddon: Total Destruction Racing 2000. The fourth title, Carmageddon: Reincarnation, is currently seeking crowdfunding via Kickstarter, suggesting that the series is now more of a cult favourite than anything else.


And that's it for part three. In part four I'll head into the twenty-first century with one of the country's best-loved games companies.