Continuing my series of posts taking a year-by-year look at the history of British video games, focusing on the many colourful characters that the industry cooked up. 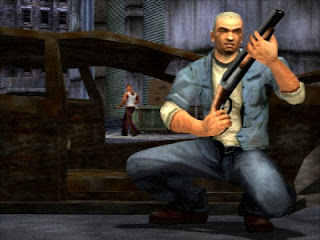 Having initiated a series of games based around car theft and gang warfare, Grand Theft Auto creators Rockstar North decided to turn their attention to another area of the criminal underworld. Manhunt takes its cue from the urban legend of the "snuff film", underground videos of real-life murders. 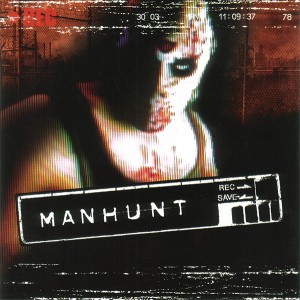 The main character is James Earl Cash (named, presumably, after Martin Luther King's assassin James Earl Ray), a man sentenced to death for unspecified crimes. At the start of the game Cash awakens to find that he has been mysteriously rescued from death row, only to end up in the clutches of an unseen snuff director named Starkweather (presumably after the teenage serial killer Charles Starkweather). The object of the game is to collect various murder implements - plastic bags, knives and so forth - and provide footage for the director by killing the gang members who inhabit the inner-city playing field. 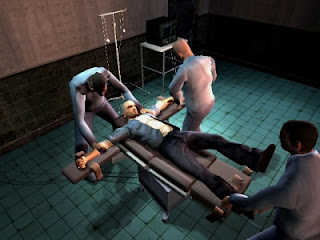 Manhunt quickly found itself a place in the ranks of controversial games: "I was pretty vocal in telling my superiors that while I'd do whatever they asked me to do (within reason), I didn't support Manhunt's release", said Jeff Williams, an employee at Rockstar at the time the game was published. "It may sound surprising, but there was almost a mutiny at the company over that game... [it] just made us all feel icky. It was all about the violence, and it was realistic violence. We all knew there was no way we could explain away that game. There was no way to rationalize it. We were crossing a line." 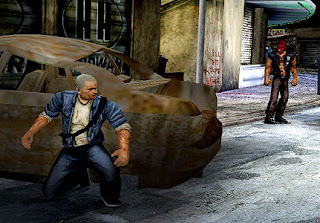 Williams draws a contrast between the Grand Theft Auto series - which parodied American crime films and could therefore be taken as a joke - and Manhunt, which went for a far more gritty feel. 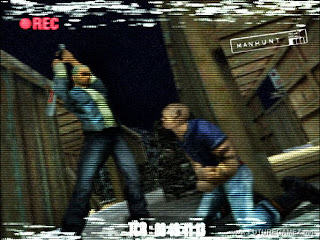 Although the impact is somewhat undercut by the fact that the victims of the "snuff films" are clearly just blocky CGI people. 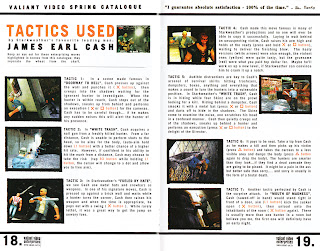 The instruction booklet for Manhunt is presented as a faux snuff video catalogue. It's all done in the best possible taste.


As a character, James Earl Cash is a blank slate. We don't even know why he was sentenced to death, presumably so that we can stay on his side and think of him as a victim rather than a criminal. The director, Starkweather, is a far stronger character: as you play the game Starkweather's voice taunts you when you make a mistake and cheers you when you perform a murder with a series of suitably sleazy catchphrases ("I haven't been this turned on since... well, let's not go into that.") The most memorable character in Manhunt is not its protagonist, but its villain. 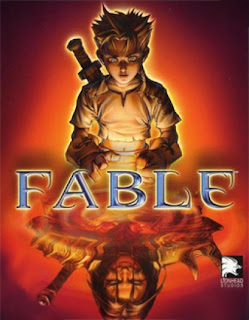 One of the main draws of role-playing games such as Dungeons and Dragons is that you can create your own character: as he or she exists only in your head and on some scraps of notepaper, your imagination is the limit when it comes to crafting your hero or heroine. Digital RPGs could never compete in this area - you could only create the a character within the boundaries of the code. In the original Final Fantasy, for example, you could choose from a set of character types - fighter, black mage and so forth - and pick a name, and that was it. Later games in the series gave up altogether and presented you with a pre-packaged character, such as Final Fantasy 7's hero Cloud Strife. 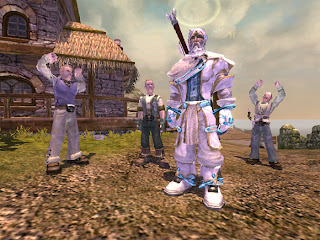 One of the more thorough attempts made by a digital RPG to capture the open-ended nature of its pen-and-paper cousins can be found in Peter Molyneux's Fable. The main character, identified simply as the Hero of Oakvale, starts off as a child and grows during the course of the game. The player can choose to make their hero either good or evil - if you go down the evil path, the protagonist even develops glowing red eyes and a pair of horns. 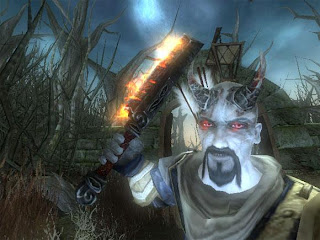 "[Y]ou play through the life of that character", said Peter Molyneux in an interview, back when the game was in development under the name of Project Ego. "By the end of the game, he may be 30 in your case, while in my case he may be 40, in another person's case he may be 50 or 60... You don't have to be the good guy. You can be nasty. If you want to, if you really want to, if you want to walk into a town and think, 'I don't like the way these people are looking at me. I'm gonna kill 'em all.' Absolutely. Fair enough. And the world will change to reflect that." 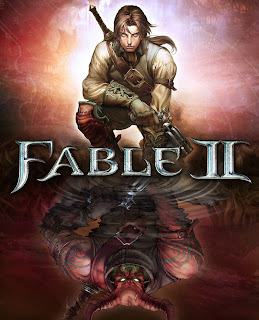 Fable II, released in 2010, puts the player in control of the Hero of Bowerstone, a character with even more flexibility. Not only can you choose between a male or female hero, you can also alter their body weight by eating certain foods. Fable III, meanwhile, stars a monarch with a whole kingdom at his or her disposal. 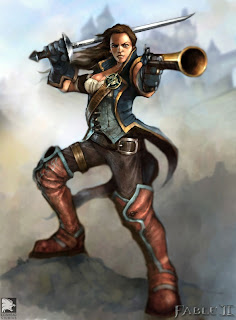 There will always be limitations, of course, but the Fable series raises an interesting question: are the best video game characters the ones that we create ourselves? 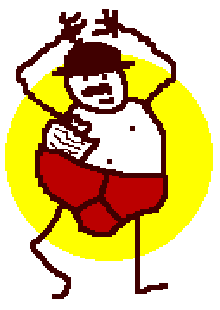 "Wait! Wait!" said Rare's website back in the year 2000. "We know that surveys are Evil incarnate, but we've got Mr. Pants the Survey Man to lead you through ours. How can you resist?" 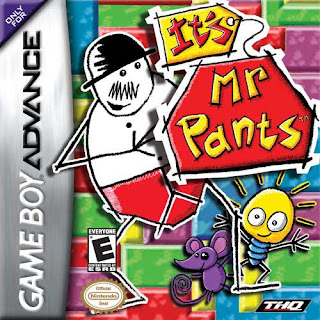 Rare was noted at the time for its offbeat sense of humour, and the decision to use a crudely-drawn man wearing nothing but a bowler hat and some Y-fronts to host the site's survey page is a fairly typical example. But that was just the beginning of Mr Pants' career... 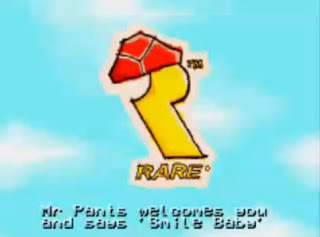 In the same way that Disney animators often hide the silhouette of Mickey Mouse's head into their films, Mr Pants began making discreet cameos in Rare's games - the funfair stage in Banjo-Tooie had a light-up sign in his image, for example. And in 2005, Mr Pants made the leap to starring in his own game. 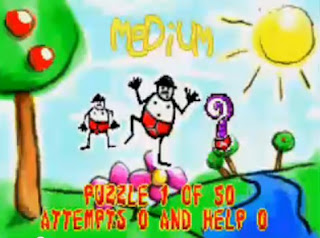 Granted, it was a bit of a last-minute move. The game started out as Donkey Kong Coconut Crackers, but when Rare lost the rights to use Nintendo's simian hero they retooled it as It's Mr Pants. 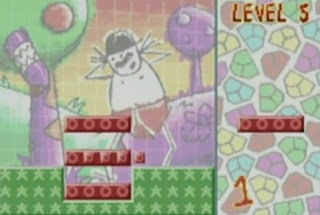 The game is a straightforward puzzler based around sliding blocks about, with Mr Pants only appearing in the background (and even then, not on every level), but he adds an undeniable charm. Mr Pants now has a voice - he turns out to sound rather like Harry Enfield's "only me" character - and throughout the game he yells catchphrases such as "pants away", "any time soon would be nice" and "my brain hurts". 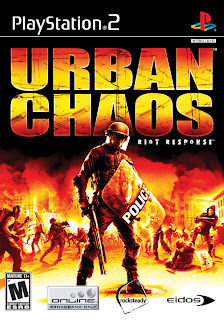 And here we have another trawl through the seedy, brutally violent underbelly of big city society. But in case you were getting the impression that contemporary video games were obsessed with putting their players in control of remorseless criminals, Urban Chaos: Riot Response instead puts you on the side of the law. 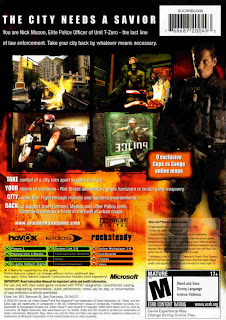 An unnamed city has collapsed into riots and gang violence following a terrorist attack, and it's up to Nick Mason and his cohorts in the anti-crime unit T-Zero to get things back into order. 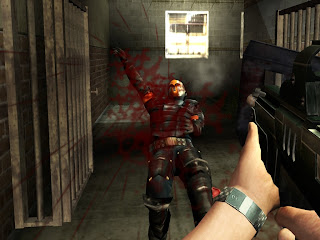 By its very nature, the genre of the first-person shooter is not a fertile ground for characters. There are exceptions (I covered Rare's Perfect Dark and its spy heroine in the previous post in this series, and the popular Duke Nukem franchise is also worth a mention) but, by and large, the protagonist in such a game will be a pair of limbs, some weapons and little else. Probably the most famous first-person shooter is Doom, whose hero is known by fans simply as the Doomguy - says it all, really. 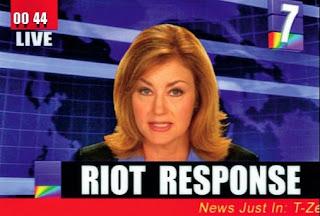 One of the game's live action newscasts.


Urban Chaos does not buck this trend: the only times we get a clear look at Mason are when still photographs of him (portrayed by a model) are shown during the faux newscasts shown between levels, and the closest thing to dialogue from him is the slow-motion yell you hear when it's game over. 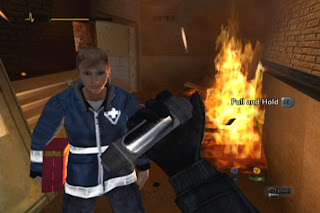 But nonetheless, the game succeeds in giving its hero presence, simply by giving him a reputation. The various medics, firemen and cops that assist you express disbelief that they're working with the Nick Mason, while gangsters taunt "I thought you were supposed to be good, Mason!" Not bad for a pair of hands. 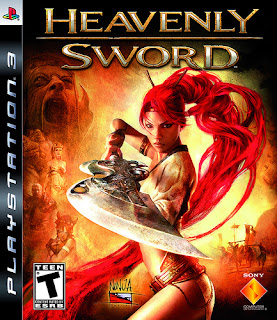 Some things are evergreen. In an earlier post in this series I covered Kuros, Rare's loinclothed, sword-wielding Conan-alike from 1987. Twenty years down the line, Cambridge-based developer Ninja Theory gave us the other side of the coin with Heavenly Sword. This game introduces us to Nariko, a flame-haired swordswoman in the tradition of the comic book heroine Red Sonja. 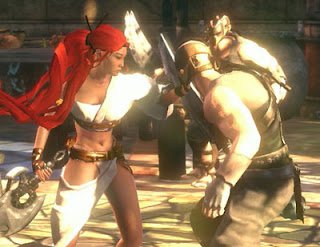 Nariko may not have been that original a character, but Ninja Theory did play with things a little. For one, Nariko makes the unusual career move of dying at the start of the game, which opens in medias res. The remainder of the story leads up to her final moments, in a possible nod to the disjointed chronological structures of Robert E. Howard's sword-and-sorcery tales. 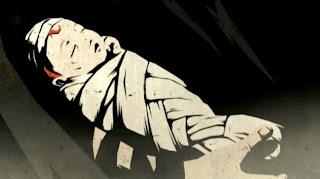 Nariko's birth in the online series.


The game was promoted with a short online animated series from the London-based studio Chase. Set before the events of the game the series deals with the prophesied birth of a saviour who will rid the land of an evil warlord. The people are bitterly disappointed to find that the child is a girl, only to be proved wrong when the adult Nariko shows her valour. 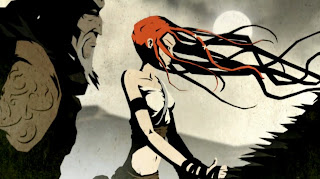 But it doesn't seem to have been her heroic self-sacrifice which earned Nariko her fans amongst gamers: instead, she was hailed as one of "gaming's hottest babes" by MSN and counted amongst UGO's "top animated hotties". Like Lara Croft from eleven years beforehand, Nariko is an example of the double-edged portrayal of women in video games.


Almost there - in the next post, we'll be taken up to the present day with a thoroughly modern batch of heroes.