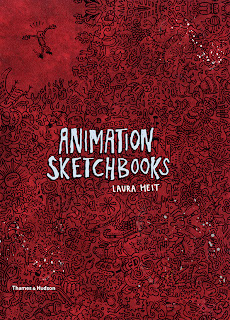 Some of the work is familiar. All of Jonathan Hodgson's sketches are related to Wonderland: The Trouble with Love and Sex, so anyone who has seen that documentary will recognise some characters; Stephen Irwin's chapter, meanwhile, focuses on his storyboards and layout ideas for Horse Glue and The Black Dog's Progress, allowing us to see those films formulated in front of us. Run Wrake's sketchbook pieces could easily be mistaken for frames from his films, with chunky marker drawings overlapping with collages of found images. 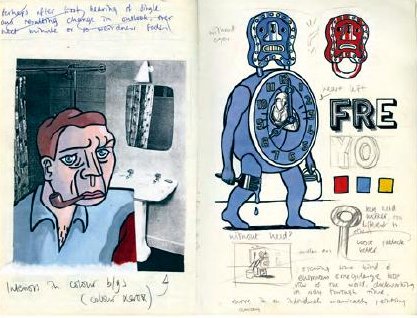 At the other end of the scale we have Paul Vester's section. I am familiar with Vester's work primarily through his homage to classic Hollywood animation Sunbeam and the offbeat but still broadly traditional Abductees. His sketches turn out to be remarkably loose, with even Sunbeam represented by a simple, abstract image.

The artists all have their own individual methods of keeping their sketches together. Suzanne Deakin contributes a few pages consisting primarily of quick thumbnail character studies, while David Shrigley's artwork is resolutely minimalist, the little square and circle people of New Friends being the dominant motif. Osbert Parker turns stills from fifties crime films into photocollages, creating the aesthetic which fed into his noir shorts such as Yours Truly. Luis Cook keeps his sketches on densely-packed pages alongside rows of scrawled-out notes ("give a better sense of gritty realism") and a few oddities which clearly have stories behind them, such as a neat table of various Aardman directors' fingerprints.

Hopefully I don't seem provincial in focusing on the British artists showcased in this book. I do so simply because UK animation is the focus of this blog; the real joy of reading Animated Sketchbooks is sampling the wealth of work from around the world, from the striking woodblock-like art of Simone Massi and Regina Pessoa to J J Villard's primary coloured felt-tip renditions of H.R. Pufnstuf, Leatherface and other pop culture figures.

With more than three hundred pages of art by its raft of contributors, Animated Sketchbooks is a welcome look at the creative process behind contemporary animation.
Posted by Neil at 11:43