Beauty and the Beast and Aladdin - no, not those ones... 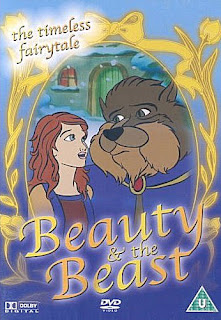 In 1992 Bevanfield Films (the company behind Murun Buchstansangur, What-a-Mess and Bill the Minder) added two titles to the meagre ranks of British animated features: Beauty and the Beast and Aladdin. Sandwiched between the releases of Disney's versions of the same fairy tales, it seems a safe bet that these direct-to-video offerings were conceived to cash in on their Hollywood counterparts.

A few years ago VHS tapes of cheap cartoons adapting the same stories as films by Disney and other big animation studios were a common sight at Co-Ops and Poundlands, with outfits such as Goodtimes, Burbank Animation Studios and Golden Films releasing umpteen versions of The Little Mermaid, Snow White and even The Hunchback of Notre Dame and Anastasia. At one point I bought several from a charity shop out of morbid curiosity and most were predictably awful. However, a few were pleasant surprises - the Goodtimes Pocahontas, for one, turned out to be a perfectly solid piece of work (and more historically accurate than Disney's film to boot). Clearly, then, whatever the motives behind these films, sometimes competent crews have been attached to them. And so I came to Bevanfield's films with an open mind. 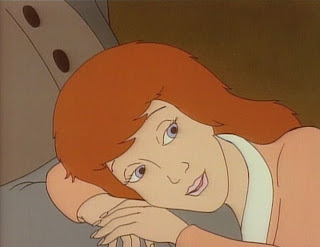 The thing that struck me most about Bevanfield's Beauty and the Beast is just how talky it is. Whereas Disney used musical numbers and other set pieces to tell the story, Bevanfield instead cooked up lengthy scenes of characters discussing their lives at home, the result resembling something along the lines of an animated BBC costume drama. The respected actors who lend their voices to the two films - Christopher Lee, Edward Woodward, Derek Jacobi - add to this impression. 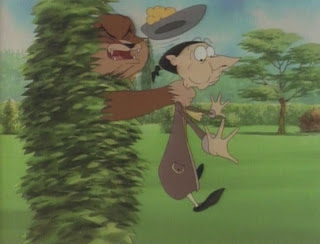 But although the novelty of the script lends some appeal, the story is ultimately pretty dull. Add to this the crude animation, clumsy direction and occasional attempts at visual humour that don't really work at all and you end up with a film that may entertain small children, but will probably be a chore to sit through for anyone else - even at a slender 68 minutes. 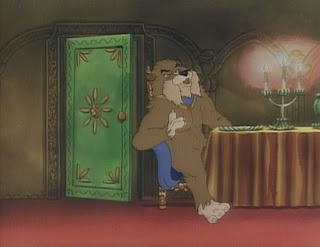 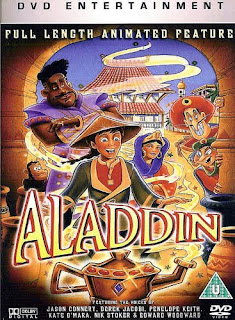 The 74-minute Aladdin is a little more entertaining, with a funnier and faster-paced script, but suffers from the same visual problems. With tighter storytelling and slicker production values these could have been serviceable children's specials, but as they are they're destined to join all the other third-rate animated fairy tales in bargain bin obscurity. Shame.

I didn't expect to find much information about these films online, so I was surprised when I came across an interview with character designer Paul Gunson, courtesy of cult film enthusiast MJ Simpson. Simpson also wrote a review of Beauty and the Beast in case anyone wants to learn more about the film.
Posted by Neil at 12:14