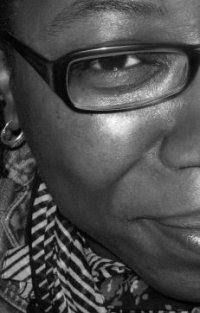 West London-born Maybelle Peters studied animation at the West Surrey College of Art and Design, where she completed A Lesson in History (1990), later broadcast on television as part of BBC2's 10X10 series, and Black Skin, White Masks (1991); upon graduating she directed a film for Channel 4, Mama Lou (1994). She kindly consented to being interviewed for this blog.


LC: How did you come to study animation?

MP: Animation was the only thing I wanted to do. From a very early age I was fascinated with the medium and had made the decision probably before reaching secondary school that I wanted to make animations. 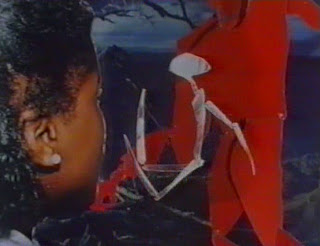 MP: A Lesson In History came out of a second year project. I had seen a book called The People Could Fly by Virginia Hamilton and having read the story, became interested in the stories of black achievement and how stories had not been told. I started putting together ideas of how that story could be told using animation. I had moved away from making drawn animations and had become influenced by the wealth of techniques used in films and was starting to use cut-outs and photographs.

It just so happened that the 10X10 series specifically designed to commission student work started up and I was encouraged to put together a proposal and pitch it to the BBC. I had never intended to make a ten minute piece but the 10X10 series was about ten films - ten minutes in length. 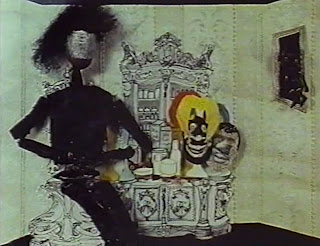 A puppet from Black Skin, White Masks bleaches his face.
Black Skin, White Masks was a response to two books by Frantz Fanon: The Wretched of the Earth and Black Skin, White Masks. It was my graduation film and like A Lesson In History, shot on 16mm. I had become very influenced by Jan Svankmajer, African masks and the multiplane. I can't remember off-hand where the music came from. I think it may have been various vinyl sound recordings that were in the department's sound studio at the time.

I'd definitely made a conscious decision to make films about things that concerned me, or just ideas that wouldn't go away. There's always been a book somewhere in the process that has spurred me on. I can sit and watch documentaries all night and day and I love the idea that animation can be a great storytelling medium and visual techniques can communicate different voices, emotions, places and timeframes.

LC: What was the atomosphere at WSCAD like at the time?

MP: The really good thing about studying animation at WSCAD was the closeness amongst the students in the department. It felt like a little hub especially since there really wasn't anything else outside of college for art students apart from the pubs! We all really loved seeing, making and hearing about animation especially the animation that we had never seen before and the creativity and variation of techniques. We all seemed to have different styles and genuinely enjoyed being around one another.

I'm not sure if all of us had been on an Art Foundation course but our influences all varied. Our animation and film knowledge had definitely been extended through our tutor Andy Darley who taught film theory. I started in 1987 and the British animation festival in Bristol was the department's outing so we were fortunate to have a festival nearby to see and hear some animators and their work. 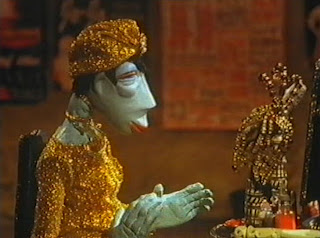 Jo-Jo, the main character in Mama Lou.
LC: Can you tell us about the next film you made, Mama Lou?

MP: I had the initial idea for Mama Lou whilst still at WSCAD. It was a fleeting idea about a woman and a bird. I was still working on my graduation film therefore, the idea was just something that I liked the sound of and left it at that. It wasn't until the Channel 4/Museum of the Moving Image (MOMI) scheme was announced that I returned to the idea of a woman and a bird. I think I started of with an idea about a man who runs a museum and there are women who he looks after. I'd been interested in, and listened to quite a lot of Blues. It was mainly work by Robert Johnson and Bessie Smith but I also wanted to explore other artists.

I used to go to the USA, mainly New York, quite regularly to visit family and on one trip, had bought a book called Black Pearls that caught my eye in a bookshop. I think I've probably read that book cover to cover several times. It had so many stories about all these Blues women I'd never heard of and was really drawn to them. I had also read a book about Josephine Baker that was really comprehensive. 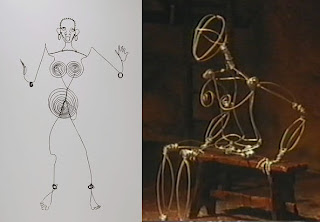 Left: Alexander Calder's sculpture of Josephine Baker. Right: the puppet of the Mama Lou character.
I put my proposal together and took photographs of a wire sculpture sitting on a chair that resembled a Rennie Mackintosh chair. The wire figure was influenced by the sculpture Alexander Calder made of Josephine Baker. I also had a picture of a cave somewhere in France that I had torn from a French edition of Marie Claire many years previously. The story was gleaned from the stories in the books and the idea of being influenced by superstitions that I had grown up with mixed in with a few researched and documented tales of superstitions. The good thing about doing the Channel 4/MOMI residency was the opportunity to spend time working with Stan Hayward, really getting the story into shape.

LC: You made Mama Lou under Channel 4's Animator in Residence scheme, which required its animators to produce some of their work in public at the MOMI. What was that like?

MP: The Animator in Residence scheme was only for development work and not the full production. I was in a 'goldfish bowl' for 3 months as part of the museum and it was a little unsettling particularly as I was in there from June to August when there were a lot of visitors. I usually did the bulk of the shooting either before the museum was busy or in the evening. I actually got locked in once because I stayed late and had to bang on the glass to get a passerby to find someone to let me out! It's a shame the museum closed down but they could probably do a similar set up in the BFI's mediathéque.

LC: What did you go on to do after completing Mama Lou?

MP: After I finished Mama Lou, I wrote a couple of scripts and received some development money from the Arts council to work on another short film. I still haven't made that film but I know at some point I will. I'm currently looking at working with a script writer to develop a longer piece.

LC: What subject matter will your future projects cover?

MP: In terms of subjects, I would like to continue exploring personal histories, family life and a person's interpretation of events.
Posted by Neil at 11:50