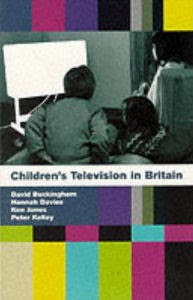 Children's Television in Britain: History, Discourse and Policy is a 1999 BFI book by David Buckingham, Hannah Davies, Ken Jones and Peter Kelley. Opening with a Guardian article covering a report by the Broadcasting Standards Commission arguing that children's television is being dumbed down, much of the book is spent examining such claims in detail. In doing so, it highlights the place of animation in discourse on children's television.

[T]he concerns about the 'barrage' of 'cheap American cartoons' voiced in these reports, and in the broader debate about children's television, involve some quite dubious assumptions about cultural value and cultural identity. Animation in particular is typically regarded homogeneous and uniformly 'bad' for children; its very presence is taken as symptomatic of 'dumbing down' and an 'erosion of standards'.

The book also explores the history of such attitudes, as when it describes the views of the BBC's Children's Department at the time Andy Pandy creator Freda Lingstrom took over in 1951:

Popular culture, particularly in its American forms, was to be opposed: in the BBC, and more generally in elite English culture, American influence was thought to be undermining national traditions and hierarchies. In 1951 Norman Collins, Head of Television Services, warned children's producers against letting 'Children's Hour become simply another vehicle for introducing American dance tunes to English children'. Americanisation was also something that Freda Lingstrom feared. 'Abhorring any hint of commercialism,' she would screen Westerns only 'over her dead body', and despised American animation.

In 1956 the Children's Department was taken over by Owen Reed. Reed expressed similar opinions:

He had a distaste for the most successful choices of ITV's programme buyers, especially in the area of animation. 'I would not touch Popeye', he told his colleagues, if it was offered to me on a plate for the same reason I would not touch Huckleberry Hound, because it is noisy. It harps on the type of violence which, in the aggregate, is far worse than all the duels [in adventure films].' It was 'agony' to watch this sort of thing, he said.

The book later quotes more recent arguments of the same stripe. One unnamed BBC executive interviewed for the book stated that "if you've ever sat in a room watching young boys watch the Cartoon Network it is one of the most frightening experiences I've ever seen"; a 1997 interview with Jocelyn Hay, founder of Voice of the Listener and Viewer, is also excerpted from:

[I]t's that kind of high-quality programming that's made with a public service remit that puts the needs of British children above all else; it's just not imported American animation or cartoons with voices and different values and everything else... if [parents] want [children] to sit down and watch nothing but American cartoons, OK. But it's not going to do the child much good... we all need a mixture. And variety and diversity - and that's the strength of British television. You've got it now. But once it's gone - it's not going to come back, and that's going to have an impact on our language, on our cultural values...

BBC 2 has been carrying some bible tales in animation, which is quite a different thing. I mean, and they've done some Shakespearean animation, so it's not necessarily bad. But it's just re-peddling things which have got very often purely commercial values that are made primarily to sell related merchandise, not even that the programme story is the driving force behind it...

The book is broadly sympathetic with Hay's views, but objects to a number of the assumptions being made. There is a suggestion that such concerns are rooted in a class-based ideology: "Hood disliked the cultural attitudes embedded in the children's service", says the book of Stuart Hood, appointed Controller of Television by the BBC in 1961; "the view was often attributed to him that it was 'too bloody middle class'". At points the book expressed similar views itself:

As in television in general, the most easily exportable material is that which comes closest to the British national stereotype: literary adaptations about middle-class white children having exciting adventures, preferably in rural and historic settings (for example, The Phoenix and the Carpet and the Chronicles of Narnia), all do extremely well in overseas markets. And of course, these children's versions of Merchant-Ivory reflect a certain construction of 'British' national identity which may well be quite close to the hearts of those who see children's television as under threat from the encroachment of 'American trash'.

It also notes that, with all the criticism of American imports, imports from other countries have been treated with less suspicion:

The BBC Children's Department was initially resistant to US imports, and looked to European productions; but by the late 1950 it was increasingly using US programmes to compete with ITV. As this suggests, there is often an implicit distinction here between 'good' imports - Czechoslovakian folktales, perhaps - and 'bad' imports - principally in the form of US cartoons.

And, further, that not all animation is treated equally:

The categories [Jay Bumler's initial BSC study] uses are occasionally quite problematic. Some of the distinctions between programmes implicitly rely on judgments about cultural value. For example, some illustrated narrative programmes are categorised as 'animation', while others are regarded as 'storytelling'. It would appear that British animation programmes aimed at the under-fives - such as Postman Pat - fall into the latter category, while 'animation' is implicitly confined to imported programmes aimed at older children. However unintentionally, this runs the risk of downgrading animation as something synonymous with cheap US imports.

And so, the book mounts a spirited defense of American animation:

Such arguments are also often based on an extraordinary degree of ignorance about the material itself. For example, the fear of 'wall-to-wall American cartoons' is one which belies their diversity... Arguably, the most innovative and creatively imaginative children's programmes of the last ten years have been animated; and many of these have been produced by commercial channels, most notably Nickelodeon. Series like Ren and Stimpy and Rocko's Modern Life have effectively redefined the possibilities of cel animation, and attracted a considerable 'cult' audience among young adults in the process. The Simpsons and Daria have demonstrated that cartoons can be a vehicle for social commentary; while Rugrats, Doug and Hey Arnold! have shown that is possible for them to tackle children's real-life concerns in entertaining and incisive ways.

There are also few graphs which I feel are worth posting as the provide statistical data on animation's place on British TV over the years. 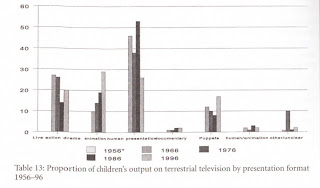 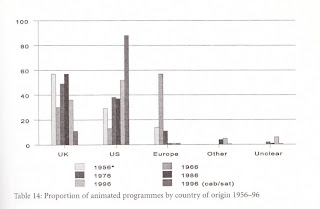 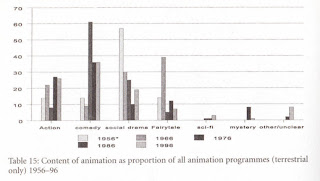 Incidentally, in case anyone is baffled by the amount of "social drama" animation in the last table, the book defines the term extremely broadly, covering series such as Hey Arnold!, Doug and Rugrats. Even with this in mind, though, the preponderance of the genre in 1956 is surprising.
Posted by Neil at 09:56